Texas and Pacific Texas Eagle: the last train on which you could cross the country without changing trains

It wasn’t advertised and I don’t know that anyone did it, but after the late 1950s saw the end of the transcontinental sleepers that were switched from train to train in Chicago, you could still go coast-to-coast without stepping off the train. Because for the short distance between Dallas and Ft. Worth, The Texas Eagle carried a sleeper from New York and one from Washington (the former via Pennsy, the latter via B&O, to St. Louis) and a Dallas-LA sleeper (to be switched to the Sunset Limited in El Paso). If all three sleepers were off-road, imagine seeing the Eagle pass with a tuscan Pennsy, a blue-and-silver or blue-and-gray B&O, and a red-and-silver Sunset Limited sleeper.

As late as August 1961 I know this service still operated, so, after the LA sleeper was added at Dallas, you could carry your things to your room there before your sleeper from New York or Washington was dropped at Ft. Worth. It wasn’t the fastest way to cross the country–if you left the East Coast on, say, Friday, you would be in LA on Monday afternoon around 4:00, rather than at 8:00 that morning when the Super Chief arrived.

The next timetable for T&P that I have is my 1964 Official Guide, and by then the Eagle no longer carried through cars from the East. (But in 1964 the Eagle still carried the Dallas-LA sleeper and also a St. Louis-Mexico City sleeper.)

To give you a feel for your Texas Eagle trip, I found the two photos below, one of a dining car built in 1948 for the St. Louis-Ft. Worth Eagle and another of the bar in a 1940 diner-lounge. The first photo is from Arthur B. Dubin, More Classic Trains, the second from Mike Schafer and Joe Welsh, Classic American Streamliners.

Below is my 1960 T&P schedule, followed by the only T&P promotional brochure I have and the letter that accompanied them and the photo above when they came to me, as a kid, in the mail. 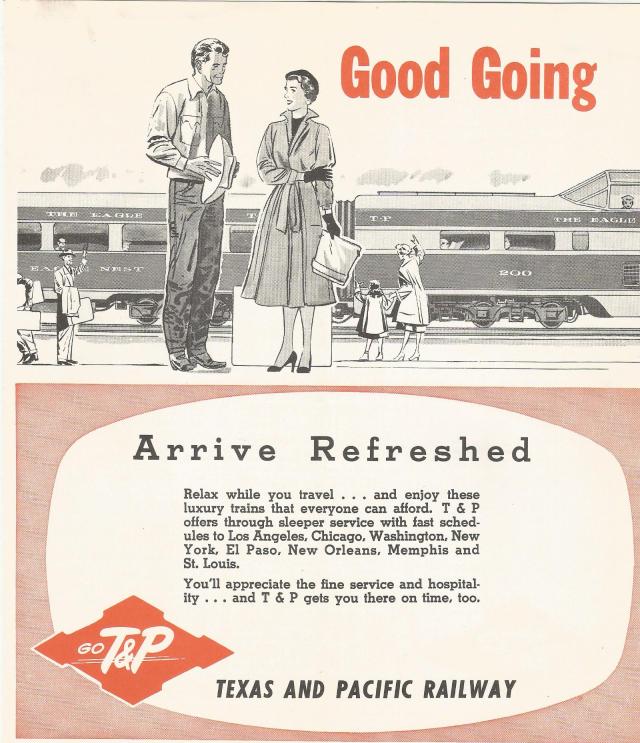 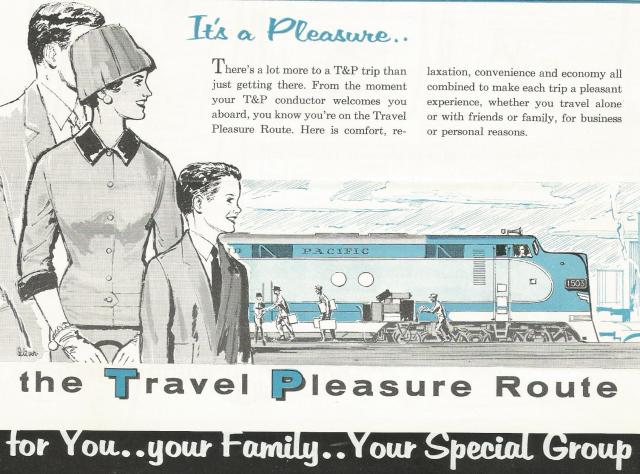 This entry was posted in Texas & Pacific and tagged Texas Eagle, Transcontinental sleepers. Bookmark the permalink.

1 Response to Texas and Pacific Texas Eagle: the last train on which you could cross the country without changing trains