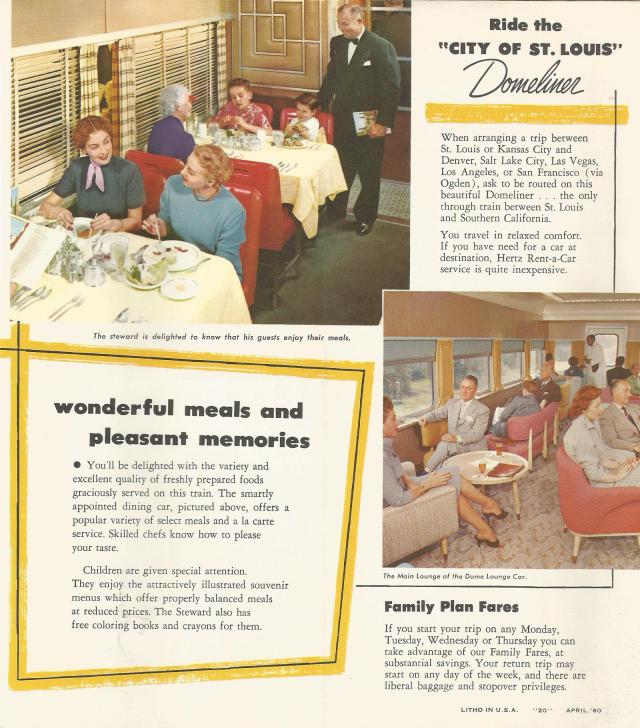 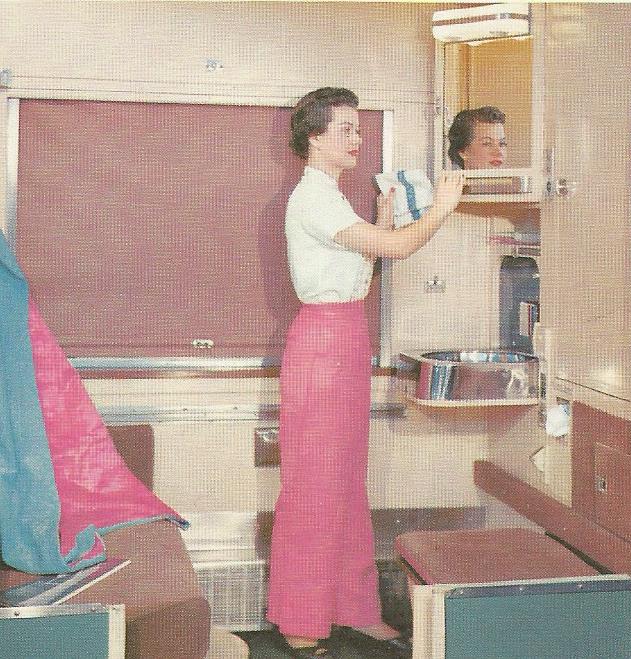 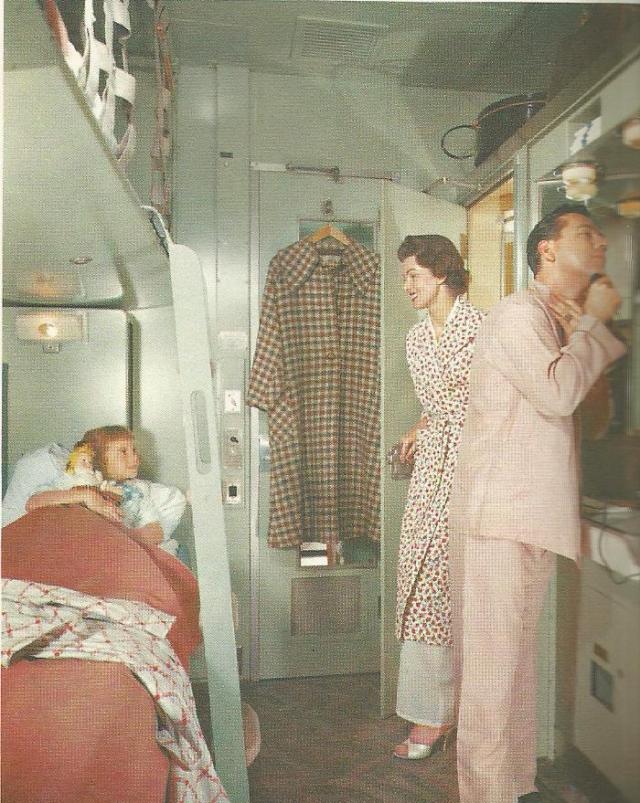 Notice the differences between the brochure below, dated December 1964, and the one above, dated April 1960. The later brochure includes the N&W logo on the front, whereas the older one doesn’t include the Wabash logo. (I have a number of these City of St. Louis brochures and perhaps will come to one with the Wabash logo; I can’t remember whether it ever appeared.) Also different, the shot of the main floor of the dome observation lounge is facing the front of the car in 1964 and facing the back in 1960. Even by 1960, I don’t think this car was still being run on the end, but rather between the diner and the sleepers. Dome obs-lounges went into service on the Cities of LA, St. Louis, and Portland in 1955, but the cars ran on the end of the trains only for a year or so, at most a few years. I only once saw one on the end, not counting the wonderful I Love Lucy episode where the Ricardos and the Mertzes ride the City of LA and the train is shown with the dome obs-lounge on the rear. The final difference between the two brochures is that the later one also shows the lounge car that was open to all passengers and ran ahead of the diner. The City of St. Louis carried a dome coach as well. It differed from the Cities of LA and Portland in that it never carried a dome diner and that it carried the club-lounge for coach passengers instead of the café-lounge on the LA and Portland Cities domeliners. 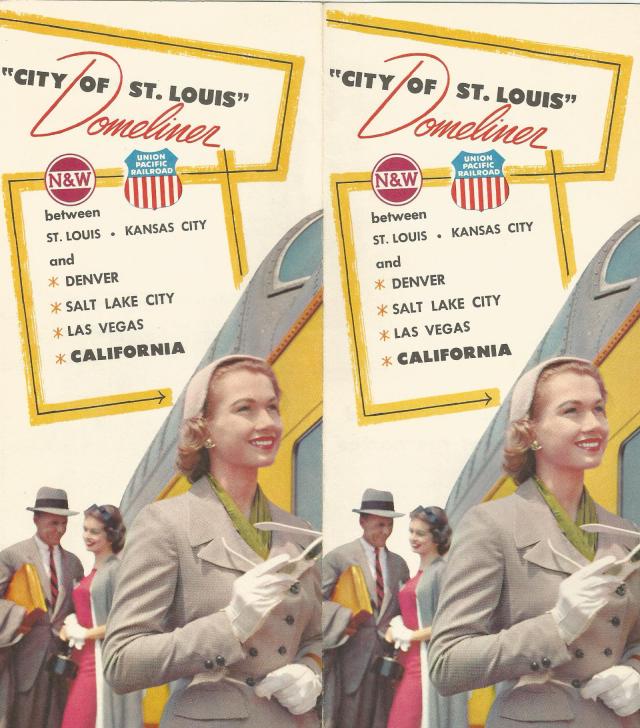 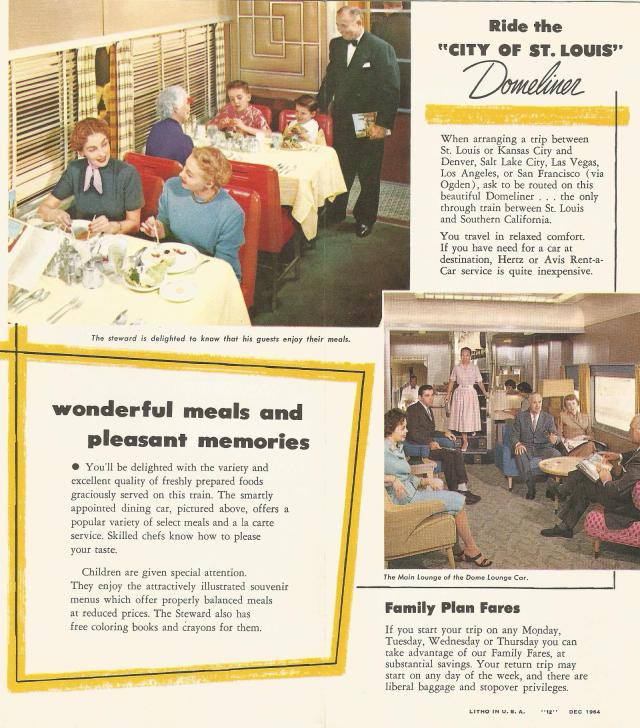 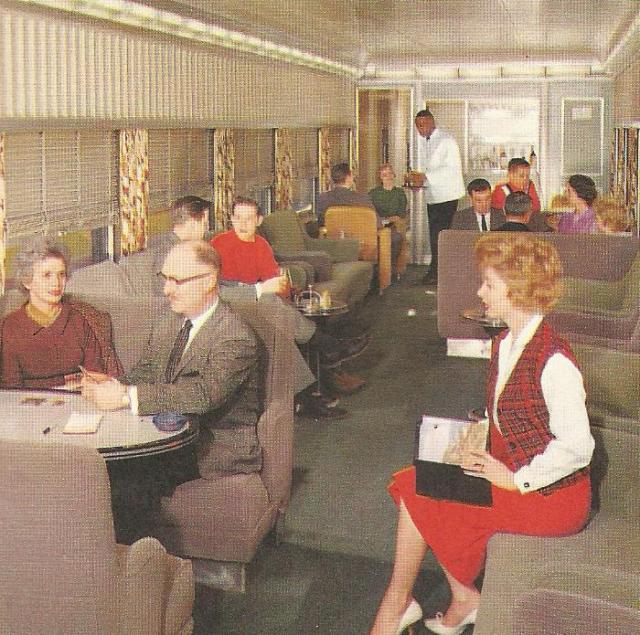 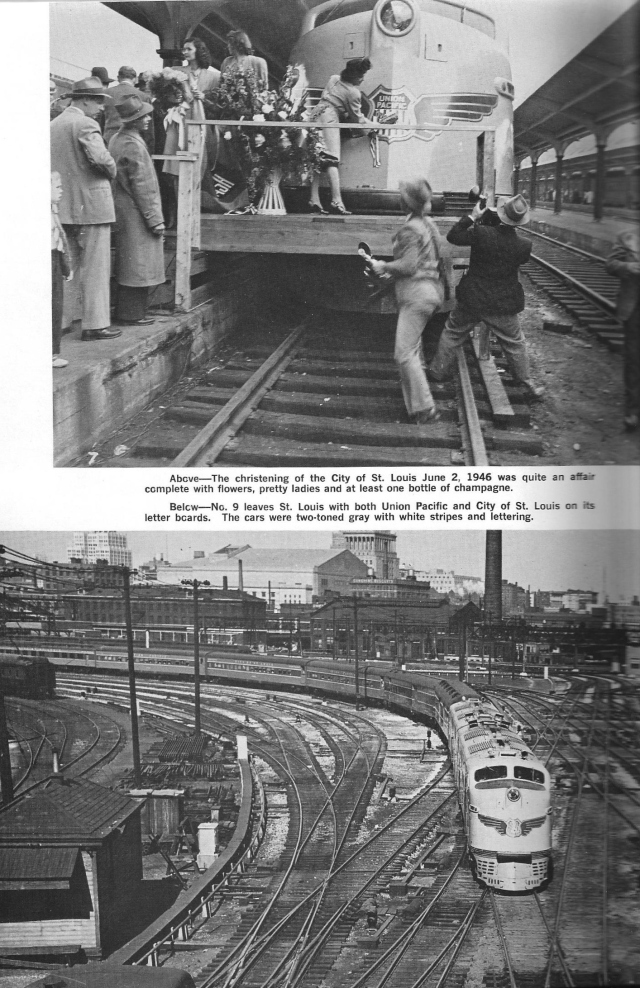 The black-and-white dining car photo above is reproduced from the book jacket of Dennis Ryan and Joseph Shine, Southern Pacific Passenger Trains, Volume 2, Day Trains of the Coast Line. The caption reads: “Awash in the depot lights of Topeka, Steward Dennis Kogan accounts for dinner receipts collected aboard the westbound City of St. Louis as chef Dennis Ryan and Barsteward Joseph Shine (all then much younger) review photos and material for this and many other books since published by Four Ways West Publicatons.” I like the photo because it shows a dining car as they appear to those of us who ride Amtrak today: with crew at work at a table, sometimes a little messy, not the elegant-restaurant publicity appearance the streamliner brochures depicted.

The color shot of the City of St. Louis leaving Denver is reproduced from an Audio-Visual designs post card and dated September 1966.

The bottom pictures, from Harold Ranks and Wm. Kratville, The Union Pacific Streamliners, show the City of St. Louis being christened and leaving its namesake town. Note that the train was in UP’s two-tone gray Overland color scheme. The date was June 2, 1946, and from then until April 1951 the train ran only between St. Louis and Cheyenne, WY, where its cars for Seattle-Portland, Los Angeles, and Oakland were transferred to other trains (The Idahoan, the Overland, and the Pony Express, not to the other City streamliners). In April 1951 the City of St.Louis became a through St. Louis-Los Angeles streamliner. It’s route was circuitous, and leaving St. Louis around four, it arrived LA mid-afternoon two days later, not the fastest way to go between the two cities. The Rock Island-Southern Pacific Golden State carried a through sleeper from St. Louis, using Missouri Pacific to Kansas City, and that car left St. Louis at four and arrived LA at 7:30 on the second morning, 7 or 8 hours ahead of the City of St. Louis. Returning, the City left LA in mid-morning and reached St. Louis around noon, while the Golden State through sleeper left LA at 1:30 and reached St. Louis early in the morning.

This entry was posted in Uncategorized. Bookmark the permalink.