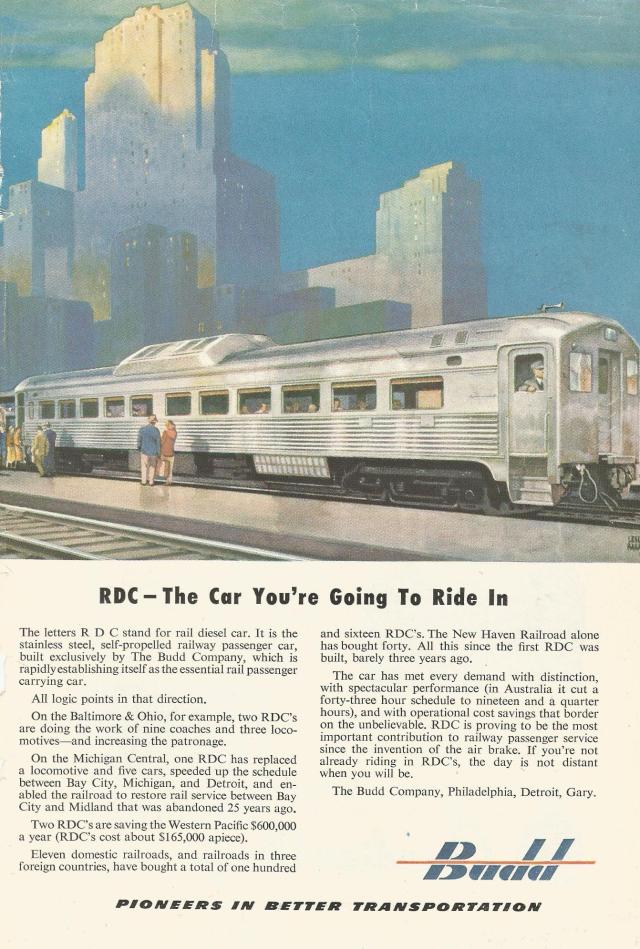 Budd’s RDC car, in a National Geographic ad above, was the railroads’ solution to running trains over routes that didn’t draw many passengers. The longest RDC run was Western Pacific’s Zephyrette, companion to Western Pacific’s California Zephyr (for which I’ve already posted one brochure here). The Zephyr left Oakland in the morning for Chicago, and the RDC Zephyrette left in the evening to go as far as Salt Lake City. The second longest RDC run, to my knowledge, was Rock Island’s Choctaw Rocket from Memphis to Amarillo, Texas via Little Rock and Oklahoma City.

Pictured below is a nighttime meeting of the eastbound and westbound Zephyrettes on the Nevada desert, and a daytime meeting of the eastbound and westbound Choctaw Rockets (viewed from one of the RDCs) near Houston, Arkansas. The Zephyrettes’ photo by Jon Brenneis, Western Pacific Railroad, is reproduced her from Portrait of a Silver Lady, Bruce MacGregor and Ted Benson. The Choctaw Rockets’ photo by Edward G. Wojtas is reproduced from Route of the Rockets, Greg Stout. The lower picture looks much better enlarged, so I suggest clicking on it once to enlarge it and then clicking on the enlargement to enlarge that further.

Many RDC runs were considerably shorter, of course. In the 1980s RDCs were still in commuter service between Washington, DC, and Harpers Ferry, WV, as I’m sure they were in a number of other commuter services.